FAI has granted a Gold Air Medal to Canadian-US inventor Domina Jalbert, whose work on canopies and multi-cell wing type aerial devices was a key to modern paragliding, kiting and sky diving. The award ceremony will take place on December 05, 2019. Domina Jalbert was nominated to this highest FAI award by the proposal of CIVL and IPC.

Domina Jalbert was born in Canada in 1904, but moved to the USA as a child and spent his working life there. He was attracted by all things flying and gained his pilot’s licence in 1927. However, those were lean times and in the ’30s he started to make advertising kites to scrape a living. He built a mixed-up of kite and balloon that he called the “Kytoon”, so he could fly his publicity flags even in no wind conditions. Eventually, he gained employment with the United States Rubber Company in Connecticut working on blimps and barrage balloons.

Throughout the war years and into the ’50s he spent his time on research and development of balloons, kite-balloons and parachutes. He established ‘Jalbert Aerology Laboratory’ and kept producing the Kytoon that had many uses – for aerial photography, or holding radio antennas or other scientific equipment. His efforts concerning parachutes were always directed towards improving the glide ratio.

Jalbert realised that the way forward was to think of the canopy as a wing rather than a device for generating drag. As the legend goes, he had this revelation while flying his Beechcraft, and measured the thickness of its wing with the fuel dipstick as soon as he landed! His experience with inflated flexible forms back at US Rubber, combined with his parachute work led him to the elegant solution that we know so well today: the ram-air doublesurface, rectangular-planform wing with airfoil-section fabric ribs.

This new wing flew for the first time in March 1964. He patented it in October of the same year. He played around with names: Kytfoil, Para-Sled, Parafoil? He chose the last one, but that name was already used by a wrapping material company, so he patented it as the ‘Para-Foil’ – with the hyphen – but everyone soon called it a Parafoil anyway!

Jalbert wings were not perfect. They were almost too keen to fly, opening with a violent shock which left the parachutist with harness bruises. This was eventually solved by another company by devising the ‘slider’, a rectangular fabric panel which slides down the risers during deployment, slowing the canopy development (later on, the first stage in the development of the paraglider would be the removal of the slider from jump ’chutes, as opening shock is not a consideration when launching a parachute from a hill).

Jalbert had shown the way; the future would lie refining his concept and adapting it for foot-launching.

Jalbert did not have all the technical equipment needed to develop his Parafoil into a commercial model, so he went to Notre Dame University in Wisconsin and met a NASA administrator, John Nicolaides. He had brought with him 20 or so prototypes. Nicolaides was sceptical… until he saw the results of the wind tunnel tests. The lift components obtained were unheard of! Jalbert was then hailed by NASA as a born genius, the greatest contributor to parachuting since da Vinci! But that was all he would get. His invention was diverted and developed mainly as a military parachute. It was believed that such a wing – with a L/D ratio of 3 – would be saving quite a few lives in the Vietnam war. There were more civil uses too: the Army Golden Knights display team switched from Rogallo’s Parawing to Jalbert’s Parafoil; parachutists in the USA and in the world soon followed.

Domina Jalbert, bitter, dispossessed, went back to his kites… He developed new models, based on the ram-air technique, and found applications here and there. He commercialised a model supporting a string of lines and hooks which became a very successful tool in Florida deep-sea fishing communities. In 1980, with a group of students, he built a giant 327 square metre Parafoil which could lift 20 tons of gravel. His dream? Reach the jet stream with a stratospheric model…

In 1988, he learned about a new sport, paragliding, through European journalists coming to interview him and pay their tribute. To Fritz Kurz of Drachenflieger, when told of the number of pilots flying paragliders, he answered: ‘this is the best of any Christmas gift!’

Domina Jalbert spent all his life working and playing with the wind, designing kites of all types until his death in 1991. 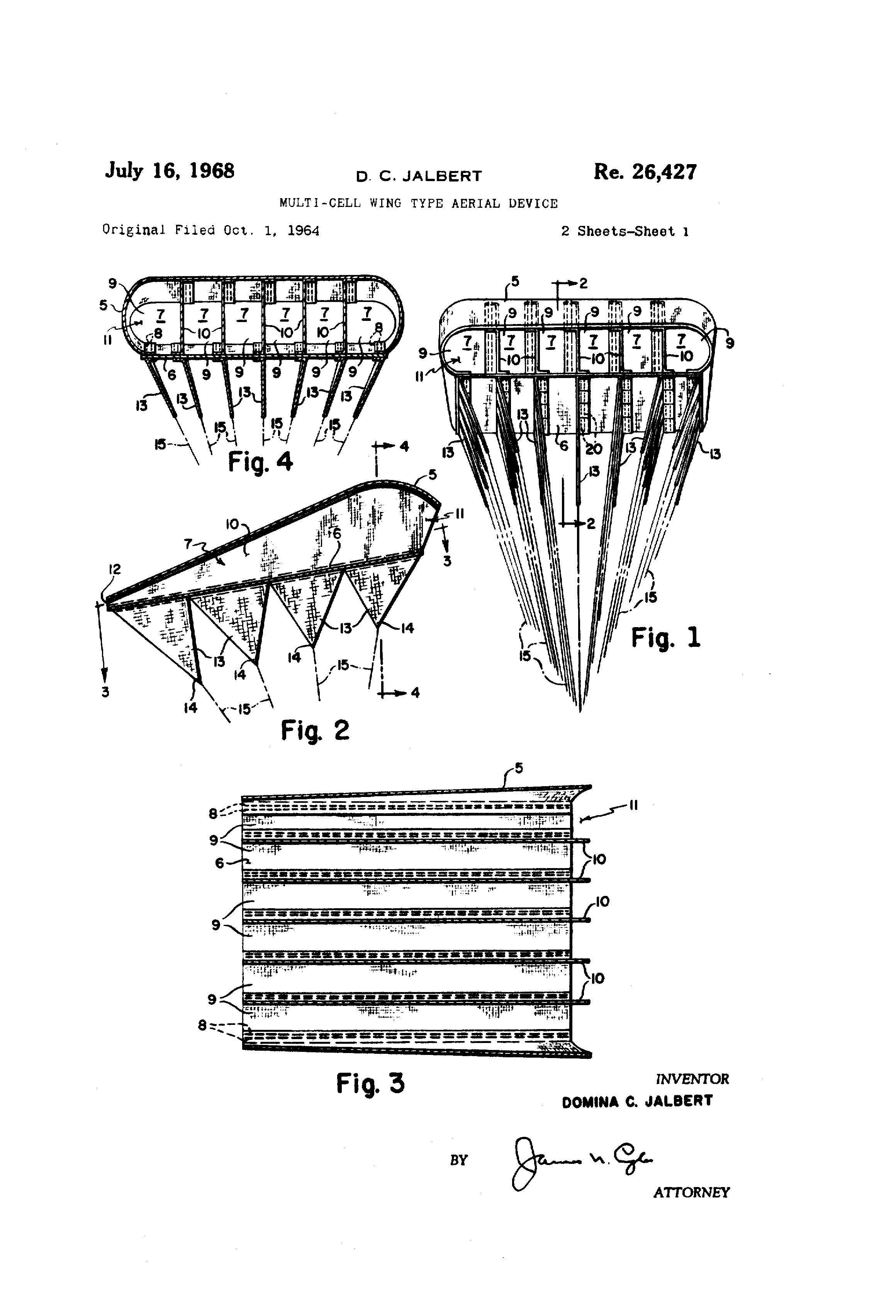