Free Flight World Championships and many major competitions are flown with the following model classes: 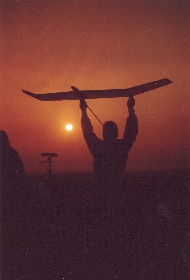 F1A gliders - projected surface area 32-34 dm2, minimum weight 410g, towline 50m. Historically also known as A/2 Nordic gliders. The gliders are launched with 50m towlines, the tow hook allowing models to be flown in circles while searching for thermals during towing. The highest performance models are accelerated to high speed before release from the towline, resulting in a climb and bunt to an altitude 30 or 40m higher than the towline length. 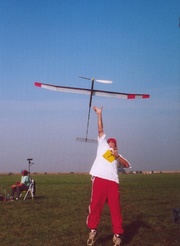 F1B rubber power - projected surface area 17-19 dm2, minimum weight of model without motor 200g, maximum weight of rubber motor 30g. Also known as "Wakefields" after the prestigous trophy which is the award at the World Championships. Typical models have a wing span of 1.8m and climb to an altitude of at least 80m while the propeller running. The initial climb is vertical aided by a powerful launch, sometimes having the start of the propeller delayed until about a second after launch, becoming less steep before the propeller folds after about 40 seconds.

The outline specifications are shown here, the full details are available in Volume F1 of the Sporting Code section 4.

These classes are flown to a maximum flight time of 3 minutes on each of 7 flights. Fly-off flights are flown to decide the final winner when there is a tie, with the maximum duration increasing by 2 minutes between each flyoff round.

Smaller model classes are defined which have a lower performance and are flown in competitions with 5 flights and the shorter maximum flight times of 2 minutes. These are 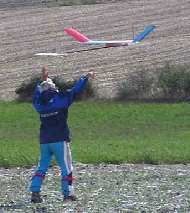 Another World Championship category of glider is F1E for slope soaring gliders. These models are steered into wind by an automatic system on the aircraft, usually a magnet linked to a rudder, and are flown for 5 flights with a maximum time of up to 5 minutes on each flight.