The second oldest competition class for flying model aircraft is control line or F2 class models. Their popularity rose quickly after the World War II and they were accepted into FAI/CIAM World Championship competition in 1960. These model aircraft are controlled in flight by a system of two wires leading from a simple “C” shaped handle to the two base points of a pivoted metal triangle mounted in the aircraft – usually at the wing center within the fuselage. The third point of this pivoted triangle is connected by a stiff “pushrod” to the horizontal moving elevator of the aircraft. The connection is to a short “control horn” which is mounted perpendicular to the surface of the elevator. The pilot holds the handle vertically with the “up” wire connection at the top or towards the thumb. Deflecting the wrist toward the thumb or 5th digit will pull on either the “up” or “down” wire, and this is translated into a push or pull of the pushrod which in turn deflects the elevator (hinged to the horizontal stabilizer) into its up or down deflection. Thus, in addition to level flight, the model aircraft can climb or dive and perform any maneuver about its horizontal axis through the wing. Loops in either “inside” (cockpit to the center of the loop) or “outside” direction (cockpit to the outside of the loop), inverted flight, square or triangular shapes to the loops, combination maneuvers such as figure eight, hourglass and cloverleaf may be performed. The model aircraft flies level in a circle with the pilot as the center of rotation and maneuvers take place on a virtual hemisphere centered on the pilot.

The model aircraft compete for pure speed in the F2A category where the engine is restricted to 2.5cc maximum displacement. The use of tuned exhaust extraction systems allows high engine performance and speeds exceeding 300 kilometers per hour over a 9 lap course of 1 kilometer distance. Timing can be done with sophisticated electronic devices to assure accuracy. 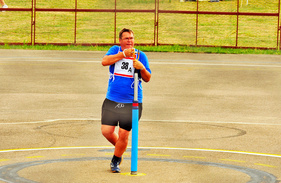 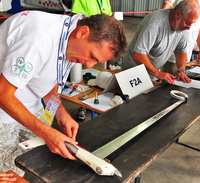 In F2B aerobatics, all competitors perform the same sequence of maneuvers much as ice skating competitors formerly performed “school figures”. A panel of 3 to 6 judges scores each of the flyer’s maneuvers for precision adherence to the described form of the maneuver. Each competitor flies a minimum of three preliminary flights with the 15 highest scores entering a final. In the finals, each competitor flies three flights and the highest total sum of the scores of the best two finals flights wins the contest. 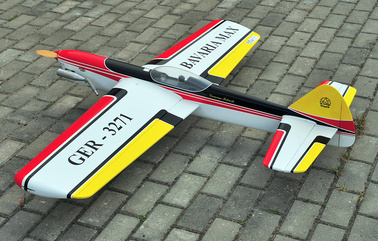 In F2C, the model aircraft race each other with three pilots flying their aircraft in the same circle simultaneously. Each model has a mechanic who starts the engine at the race starter’s signal and catches and refuels the model when it runs out of fuel. In a 10 kilometer (100 laps of the circle) race, refueling is done twice on average because of the mandatory 7.0cc limit on fuel capacity. Speeds of 200 kilometers per hour are achieved and pilots must exercise great skill in overtaking competitors, and in takeoffs and landings, with this degree of model performance. Competition is close and many races are won by tenths of seconds which requires great pit stop skill on the part of the mechanics. Championship caliber mechanics catch the model, refuel it, restart the engine with 1 flick of the propeller, and release it in less than 4 seconds. 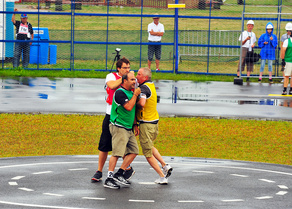 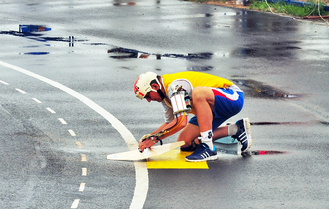 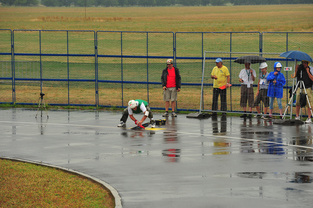 F2D is the combat category where again there are multiple pilots in the circle simultaneously. This time it is two, each with two mechanics on the ground. The aircraft are light in weight and very short from nose to tail so as to maneuver quickly in the air. Each has a 2,5 meter crepe paper streamer attached to the rear of the aircraft by a 3 meter string. Each pilot may attack the other’s aircraft at the streamer only in an attempt to cut the streamer with his or her model’s propeller or wing leading edge. Each cut scores 100 points. Each second the model is in the air scores a point and the match runs for 4 minutes from the starter’s signal to launch the aircraft. At the almost 200 kph speeds of the aircraft, mistakes of the pilots often lead to crash damage so two aircraft are allowed for each match. The mechanics (2 per pilot-contestant) are on the lookout for the crash and will quickly start the second aircraft, retrieve the streamer from the first and attach it to the reserve model before launching. The action is so fast that the new observer frequently cannot see the actual cuts of the streamers as they happen so quickly. Each competitor is allowed two losses before they are eliminated from the contest. The last survivor wins. 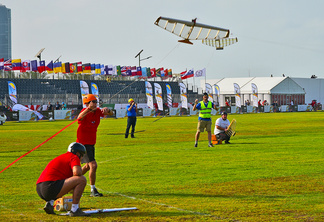 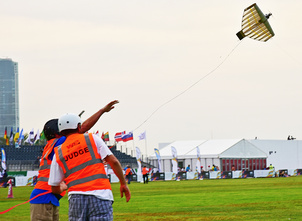 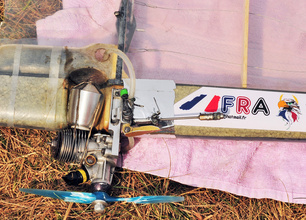